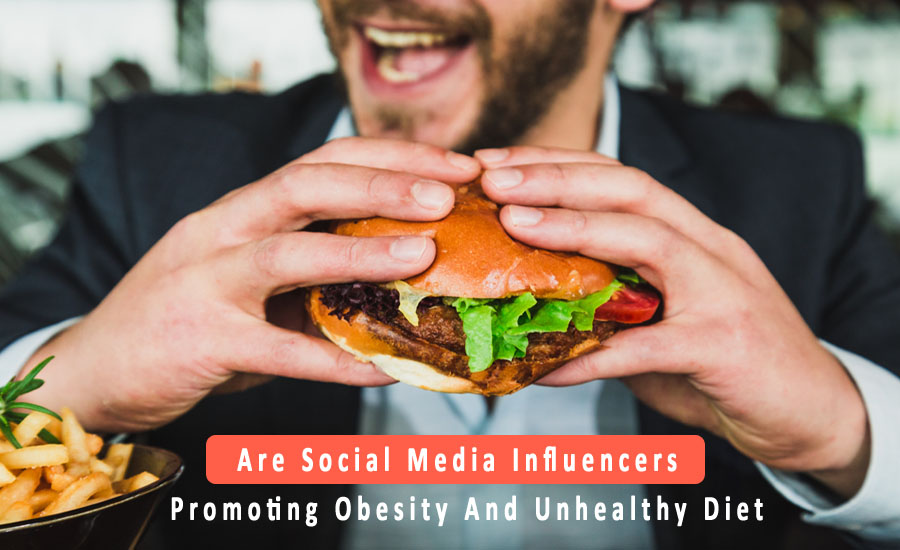 People today are often vocal about all sorts of diseases and health issues but are overlooking or not talking about, justifying, and sometimes even glorifying this severe health hazard obesity is. However, can social media be blamed for this rising issue? Yes? But obesity was always present even before the social media revolution came about. No? But the statistics state a clear hike in people suffering from overweightness over the years, and what about the body positive movement.

The following article will cover how social media is influencing the body image of people and if or not influencers are glorifying having that extra pound and unhealthy diets. Before that, let us look at what obesity is, the related issues, and some worrying statistics that call for immediate action.

A person with a body mass index(BMI) above 30 is considered obese or overweight, and it’s one of many leading causes of death for people around the globe each year. It is a medical condition where the excess body weight may build-up to the extent that it directly impacts an individual’s health negatively.

Numerous factors can lead to obesity and overweightness, such as Genetics, unhealthy eating habits, lifestyle, eating disorders, underlying medical conditions, pregnancy, certain drugs, and physiological and psychological influences, among many others.

The Disturbing Stats and Health Hazards

Recent years have witnessed a significant hike in people suffering from obesity around the globe. 13% of the entire world’s population is obese today, while 39% are overweight. To give you a better idea, the United States ranks 12th in the list of countries with 1/3rd of its total population either obese or overweight.

The hike in obesity rates is not just noted in adults but children and younger adults too. Every one in five kids worldwide is obese, which is staggering data as kids are in general hyperactive and love physical activities. A significant percentage of these kids lie in the age group below 5, which adds to concerns.

According to WHO, the death ratio of obese and overweight individuals has reached an epidemic proportion worldwide, with a whopping 2.8 million people dying each year. This ratio is much higher than people dying because of malnutrition or being underweight.

A few of the health issues that come with being overweight or obese include – increased risk of heart diseases, high blood sugar levels (type 2 diabetes), risk of certain cancers, high blood pressure, skin issues, and other chronic illness.

While these are just physical health issues, being obese can be rough on one’s mental health as well. There is a lack of self-love, negative self-image, low self-esteem, bullying, hate comments, among other societal implications adding to the torment of an already challenging life.

Social Media and its rising influence

Today, social media dramatically influences and molds how one thinks, their perception, views, thoughts, likings, dislikes, and everything from political stands to their ethical beliefs, and it is hard to run away from it.

There’re a variety of ways in which it positively affects and has evidently implemented several social reforms. There have been quite a few online movements that improved the standard of living for many and have surfaced issues buried deep in the social construct. But, while there is no denying that it is indeed a worthy platform of the hype it got and contains the power to bring about change and bring people together, there, like everything else, is a downside to it.

Influencing people has become easy, with people taking the word said online by a famous persona as gospel truth. This makes it hard for people to accept the faults and sometimes understand the true motives of an individual behind their certain post or movement. Such is the case with obesity. Let us talk about both the negative and positive effects social media influencers have on obesity and the lifestyle changes people employ.

Fat shaming and idolizing unrealistic body goals have long been a part of the culture everywhere, especially in the entertainment industries. For the longest time, the media portrayed slim girls with a tiny waist and sexualized curves as the ideal body type, making everyone from young to adult women feel bad about their body types. There have been countless cases where people, especially women, felt the need to meet society’s definition of beautiful, all until social media came about.

Social media brought about a body-positive movement sending a strong message worldwide that everybody is beautiful despite their body type. This sea of reforming the already existing definition of beauty brought women from around the globe together to accept that not all bodies are slim and model-like but are perfect the way they are.

Over time many brands and businesses also employed plus size models, and body-positive influencers became the new trend. But, not everything went as smoothly and with all the positive aspects as everyone thought.

The Influencer and Their negative Impact

Many people had completely different views and perceptions on the positive body movement, which otherwise had people swayed in the image of an accepting world it portrayed. And there is no denying that such a side of social media exists, which does more harm than good in promoting certain values.

Below are three major faults in the ways social media works –

The mismatch of understanding

Many influencers have been accused of having a negative impact on younger girls and women regarding their views on being fit. The posts and messages of loving oneself irrespective of their body weight or looks are told to bring negative reasoning, with reduced efforts to change.

People argue that such models and brands make obesity look beautiful and crush any motivation to shed some of the extra pounds. Influencers are also accused of portraying obesity or overweight redness as nothing harmful to health. Since losing weight is a challenging goal to achieve, many start rejoicing in how they look in the name of body positivity instead of working hard to remain fit.

While a lot of people argue that plus-size models and body-positive influencers are glorifying obesity and overweightness, it seems to be the case of simple misinterpretation. The counter-arguments from these models and supporters state that it is not about promoting a particular lifestyle or fat acceptance. It is about not hating oneself or others for the way they look and support, respecting their journeys.

Neither of the arguments can be denied, for there is, even if a little, truth to it all. It is true that people readily believe what they consume on social media applying it to their daily lives, more so if it makes them not feel bad about themselves for once. But, perception is subjective, and so is it correct to blame influencers who promote self-love?

Open a social media handle and a bunch of posts with people enjoying Starbucks and fast food straight-up display on the screen. These eating displays are not only promoting standards of life for many but are also promoting unhealthy eating habits. Children who have access to social media are lured by such posts and deny healthy food, unaware of the consequences they might have to face.

The ease of access to junk and fast food makes it easier for kids to develop bad eating habits early in life, leaving long-term ill effects on their health as they grow older. Though such might not be the motive of any specific post but its impact can’t be simply disregarded or overlooked.

Wide of the mark Information and diet plans

As said earlier, everything on the internet or social media is not the gospel truth. Many influencers on social media promote fitness through diet plans and products they are themselves unsure of. There is a lack of authentic information and understanding, resulting in a negative promotion.

Many people collect information from the internet and, without proper research, post it online, and many others are paid to promote certain products without appropriate knowledge and background check. Desperate to lose or gain weight, people follow these diet plans without fully comprehending their application and effects, doing more harm to their bodies than good.

It is imperative to understand that not everything online is correct, and it requires a lot more authenticity than a post by a famous person to alter your diet plans and lifestyle.

To blame a person or a movement without understanding their motives is not at all correct. People need to be mindful of their choices and their impact and not just blindly fall for anything they see online without proper awareness. At the same time, it’s also crucial for influencers, as someone with a powerful voice and impact, to be clear of their motives and talk about the ill effects of being obese or overweight as they talk about body-positivity. Obesity is a rising concern around the globe and needs to be actively tackled with proper acknowledgment of its harmful effects on health. Happy Scrolling!