How Do Millennials Use And Control Social Media? 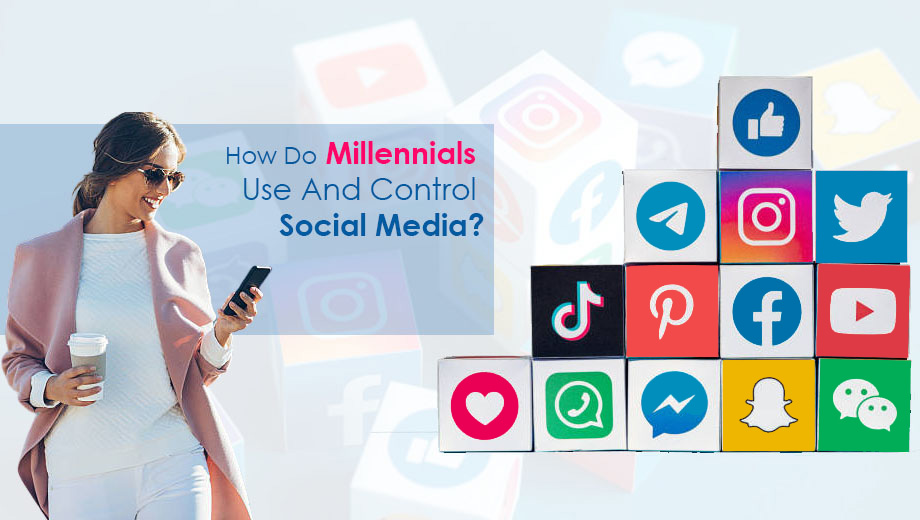 Though human beings have an attention span of just over 8 seconds, it does not deter us from spending hours at a stretch sprawled before the media browsing through posts one after the other. No matter how much we criticize or badmouth the media, at the end of the day, we are its mass consumers.

Over the years the social media has grown. From the eternal Facebook to the trending tik-tok and Instagram. The virtual world has crept in and taken hold of every aspect of the human world, from capturing moments to celebrating milestones. Admit it or not, the virtual world has leaped over and gained more prominence than the real world, with millennials spending more time and money to save their virtual alter-ego.

So which social media attracts the most people? How are millennials using them? How do they control social media today? Or are the people getting controlled by this vicious net? Read on to find out.

Social world- the engagement it demands

Social media was built as a platform for people to socialize and communicate with each other without the barrier of a distance coming in between them. But ironically, the social world is not as sociable as it was supposed to be. With people boasting of faceless friends and ignoring the real world around them, social media had lost its meaning long back.

But with years, a new meaning has become attached to it. ENTERTAINMENT.

Advertised as the wholesale entertainment package, social media never runs dry with the content. There is enough for everyone’s greed. This is why social media hooks people to it. With videos, sentimental posts, graphics, paintings, memes, creating content, educational… no topic under the sky is left untouched. This demands and gains the engagement it deserves.

The social media world runs dry without engagement. This factor is the main reason which has led to the large-scale commercialization of these platforms in the present times.

The star of the social media world

The shining star of the social world title is still held closely by Facebook. Most probably because it was the first platform at such a wide scale, and it withstood the challenge of time with its constant upgrades. Though YouTube and Instagram are soon catching up, the charisma of Facebook never fades.

The other media that have taken the virtual social world by storm is video-creating apps like tik-tok, Instagram reels, and many more. With people’s ingenuity, the platforms find a unique style with each user striving to bring out things and ideas to cater to the wide audience.

How are millennials using them?

Though primarily the social world caters to entertainment, it aims to serve and expand its horizons by including the news and the educational content. Thus, creating one size that fits all fashion.

Let us look at the top five giants and what millennials do on them.

Facebook is a place where you can connect with people and at the same time browse through contents/ videos that you like categorized under several categories and occasionally stumble across Facebook ‘finds’ that you absolutely fall in love with.

Instagram is more of a sophisticated world where people put out the perfect self that they desire for themselves. Though this is prevalent in Facebook, too, Instagram passes off as a world that abides by it. Though the explore and the reels page are a breather, people still spend a lot of time perfecting the candid and sun-kissed selfies. Thus, Instagram, by default, serves two purposes- to show off your perfect side or to watch others showing off their ideal side.

Twitter is a more sophisticated site which is a tool for the people with wit, whereas others enjoy the battle of words. Unlike the others, Twitter is not a photo-sharing platform but a way to engage with people using hashtags and share/comment about things that you feel are right or wrong. This makes it a more genuine platform where people can get their news and updates on state affairs and their stance.

YouTube is personally my favorite. You can search for any content of your choice. YouTube has them covered up for you. Want to learn violin, don’t worry, you can. Want to learn Korean? Leave it to YouTube scholars. Want to bake? Top baking ideas are waiting for you. You want to study for the upcoming entrance; YouTube has covered that too. With no limit on time duration and content, YouTube provides a more relaxed environment for the creators.

Tik-tok was a fresh breath to the media world, which took things beyond photo sharing. Now people could connect in short video format. Add to it the spice of editing and music; the package was complete enough to hook people to it.

How do the millennials control social media?

The virtual world has kept intact the principles of the conventional society we live in. People with name, fame, and face gain prominence and rise to the top of the social ladder. There is a race to project your perfect face and to hide the blemishes, and this, in turn, creates a cycle of impersonation.

With the media being saturated with content creators, each one is in constant agony to outwit the others to fend for themselves. This is prevalent across all media platforms and in all categories of content. Since we buy what we see, the platforms churn out content that caters to the millennials. Since the millennials are the major consumers, they control and dictate most of the contents that appear and find success.

Though we say that people’s choice is what creates and upgrades the social media world’s contents, it is an irony how people get controlled by them.

It is a common site where we find people, especially millennials spending more time than what they desire on these platforms. Browsing between meals, while waiting at the subway, during breaks, before going to bed… the social media takes up more time than what people think they are setting aside for it. On average, Americans spend close to three hours daily on these platforms. The numbers are alarming because it also includes people who have no or limited access to the internet. Fast forward a few more years, with better connectivity; the number is going to rise more.

Our ideologies and thoughts are framed on the data we perceive on social media. Not provided with an alternative, the ideas that catch fire on the media become fodder to all people.

Since the media is all-inclusive, no content is filtered. On the one hand, it shows the progressiveness of the society, but at the same time, radical views in the content might cripple and attack the innocent.

The media world continues to cater to all people’s whims and fancies, especially the millennials, since they are significant consumers. Though this implies they have control over what they want to see, the media governs what they see. This brings in the irony of the situation of who is controlling whom.