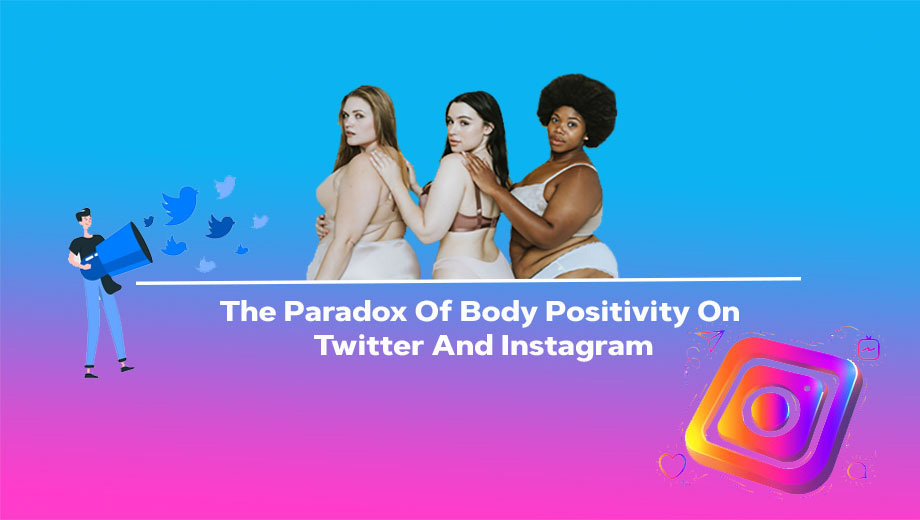 The Era Before Body Positivity

There was a time when charming models with superfit hourglass body shapes flooded the internet and entertainment industries.

All it needed was a click on any popular social media site or television, and the algorithms would automatically highlight the ‘socially acceptable bodies’ who were slim and fit with no blemishes and glossy skin around the clock. Not only this, but the standard was also promoted through advertisements, magazines, brands, and even in shows and movies. The leads were shown to have a perfect and attractive body with a successful career and seamless relationships, a measure far from reality.

The use of hashtags like #naturalisbeautiful #selflove by attractive women on their handle with a post that showed nothing less than flawless physique made it even worse. Since all of these were achieved using proper lighting, makeup, and editing tools but were never brought up in conversation, many women felt out of place, inflicting self-doubt.

It will not be an exaggeration to call it a perfectly curated lie that was spoon-fed to millions online in the name of what normal should look like.

The devastating effect it had on several men and women, especially self-conscious people and teens, was apparent. Marketers and brands hugely used people’s desire to meet the standard and a negative self-image to fix strategies for their advantage.

The setting was so strong that it had people around the globe fastening their beauty standards to this unrealistic and naïve wave of global beauty trends. Young women seemingly fell easy prey to this unrealistic longing, straying far from the real and extremely normal way to life.

The setup served sexist remarks with an altered definition of femininity and severely impacted young people’s mental health. Where all they could do was either compare, hide, or spend a fortune in faking it persuasively. With more people online with each passing day, the impact only grew grander, especially on popular platforms like Instagram and Twitter.

Not to challenge anything but the ingrained ideals have most certainly questioned the right to equal opportunities. The preference of one over another comes from a place much more profound and often is acted out without notice. There have been cases where ‘standard beauty’ has replaced determination, hard work, and talent for the longest time.

The Spark Of Reformed Definition

To claim that the battle against fake and impractical beauty standards is contemporary and new will be wide of the mark. The revolt goes way back to the slamming of Eurocentric beliefs. With a couple of women fighting the traditional opinions, the changing attitudes, and understanding had it turned into a full-fledged movement today around the globe.

Several people from different ethnicities, cultures, backgrounds, colors, and beliefs thrived for more ‘normal’ standards, acceptance, and a reality check for everyone going through a self-love crisis.

Although, what helped the movement gain momentum was undoubtedly social media. Let’s look at how social media impacted the pace –

The demand for more inclusive beauty norms and lifestyles grew more intense with social media since it was among the mainstream media used by brands to drape the image of generic beauty.

For the longest time, the brands focused on women with sculpted faces, sharp features, flattened tummies, tiny waist, sexualizing the curves and volume in all the ‘glorified’ places. They sold it with ads under the name of ‘body positivity,’ employing unattainable and false notions among the vulnerable in society.

With better understanding and women growing to realize how fake the entire concept was through the internet, a wave of body positivity reforms came rushing in. A number of people started advocating for fat bodies, stretch marks, cellulite, and discoloration, among other features of a perfectly ‘normal’ body.

Slowly and steadily, the internet witnessed more people coming forward to contribute to the cause, with pictures of them that showed all the ‘flaws’ and their original body type, switching what self-love and body-positivity meant for many.

Many women talked about their fight with self-image, acceptance, hardships, and how the movement provided them with a safe place to discuss such radical issues in society.

The brands and mainstream media started shifting focus by employing plus-size models and making beauty standards broader to include everyone.

But, like everything else, this too had its fair share of drawbacks and loopholes, a paradox to the online body-positivity.

The Flip Side Of Body Positivity

While it may seem like a good cause, which it is, the implications of this movement grew scarred overtime. There are many misconceptions, hypocrisy, unawareness, and lack of support growing as we move along with the movement.

Nothing. Absolutely no community is short on people who try to pull down a cause or place their contradictory views on people like it is their right. The comment feed and handles of many body-positive models are flooded with people slamming the concept, not understanding the situation and the need for conversation.

The hate only grows among people with such mindsets causing more harm than good towards building a more inclusive society. One of the significant standpoints often put up while reasoning for hate is the influence these models have on younger women. These people often claim that by glorifying obesity and ‘bad’ body types, these models send a message that promotes bad-eating habits and lack of fitness.

Not only this, active participation in such conversation defending the cause can even get a person cornered by several. The models have also been seen indulging with their haters, slamming them with hate in return, turning the whole thing into nothing but a minefield of toxicity.

The Fascination And Stride Away From Reality

After a long struggle with self-love and acceptance, when a person gets a green chit from society, not to mention the additional fame, it is bound to take a wrong turn once in a while.

The feeling of not wanting to hate themselves for who they are and the approval of being beautiful comes with a strong sense of feeling powerful. Such kind of authority, not over anyone else but them, brings an urge to capture it for life.

The concept of beauty standards is still not understood by many women themselves. They simply name this switch in kind of approval and call it body-positivity, falling prey to yet another lie.

There are times when reality checks in with all the past distress and fears. No matter how happy and accepting a person may look in their social life, in times like these, the overwhelming feeling of having to love oneself and trying to be positive lingers like a storm in the mind and body.

One may act like they don’t care about society’s rules and what people think, but the hate and love relationship with oneself and others can cause great suffering. It is necessary to hold onto the feeling and accept it, knowing that courage and nerve to live a fulfilling life despite the circumstances are the most remarkable achievement.

The Relationship With Health

Under no circumstance is avoiding and promoting poor health is appropriate. Though it is certainly not what most of the models online are trying to do, being mature enough to understand the bigger picture and true intentions is imperative.

Many people are reluctant to differentiate an eating disorder from obesity because of negligence and spread hate and misinformation in the community, among other such issues.

Neither is it okay on the front as a model to overlook the harm excess body weight has on health ranging from issues like heart diseases to diabetes.

The True Essence to Being Beautiful

The idea behind removing the initial beauty standards was not to replace them with society’s acceptance of other body types. The key is to eliminate the need for approval, admiration, or endorsement from any person whatsoever.

It is to look beyond what anyone looks like, fat or not. To not judge in the first place, eradicating the need for acceptance once and for all. To understand that everyone is their own person and that exterior never tells the true nature of a person.

The advocacy of fat people, in general, disregarded the existence of other groups in society. The gay men who are compelled to look a certain way, the average women with bodies neither fat nor thin, and many such groups are often buried deep in the conversation, not finding a place to fit in.

The draping of beauty standards with veils of kinds makes it harder to accept that there are endless variations in what people look like, how they interact, their culture, and their definition of beautiful in this vast world. To no extent is it a limitation or acceptable to simply include a group and call it a ‘body-positivity’ movement.

Beauty is not the body you are born in, it is the person you grow to become that makes you beautiful. There are a million definitions of being beautiful, subjective to individuals.

While the body-positivity movement is undoubtedly an excellent step towards a more accepting world, it is kindness that we need. Moreover, waiting for others to accept you when you can’t place enough importance on yourself not to want any validation is misleading. Feeling the liberation, showing your body the love it deserves and keeping in mind that you’re not here to please people will go a long way. Happy Scrolling!