Top 5 Instagram Celebrities And How Much They Get Paid 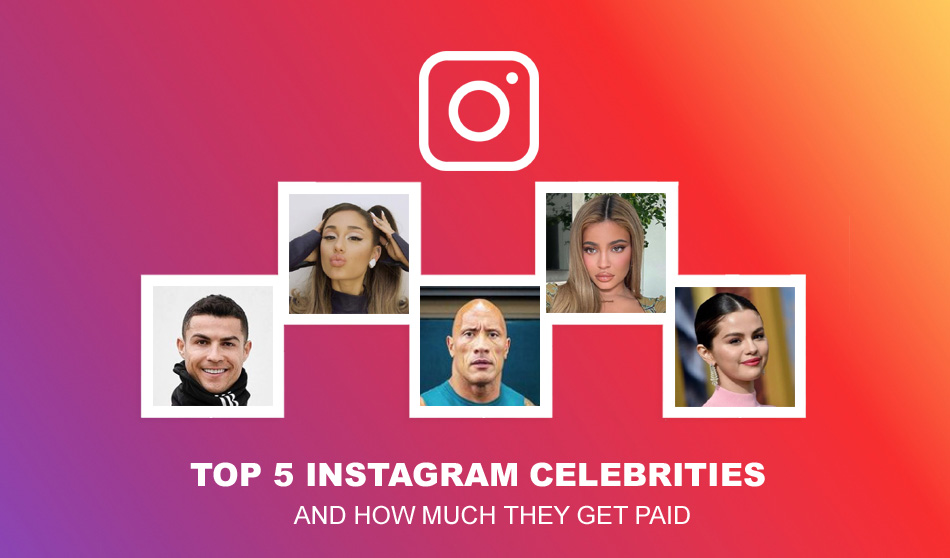 Instagram is a super popular social media platform nowadays. Now it has evolved into a marketing tool where people can start earning money. Instagram is no longer that social media app launched back in 2010, where you could click lovely photos. At present, it is one of the most popular and fastest-growing social media apps. It boasts of an active user base count of 1 billion monthly. Over 500 million people log in to Instagram every day. Thus, now you know that Instagram is a lot more than an image-sharing platform.

It is a direct window where you get updated on what is happening at this moment around the world. It has now also grown into an essential tool for social marketing. In this aspect, Instagram is the most popular among marketers who use it to gain and engage with their audience. It is also prevalent for influencer marketing. More and more influencers are emerging every day and discovering the convenience of Instagram’s features. Understandably, marketing is the way to go if you think of making money on Instagram and even getting PR packages.

Ronaldo is someone who doesn’t need an introduction. He is one of the best football players across the globe. Yet, Cristiano Ronaldo is a Portuguese football player for those who don’t follow the football game. He plays in the position forward. He is also the very first person to achieve a follower count of 200 million on Instagram.

When you look through his feed, you will receive quite a few surprises. He has uploaded quite many family pictures, general images of him while experiencing the finer things in life, and photographs of him practicing or playing football. Ronaldo is such a celebrity that any brand would love to endorse its products, especially sports brands. And why not? He would be the dream celebrity and someone who does the endorsements well. He is different from other stars who do endorsements. Unlike others who resort to mentioning a brand name and don’t even write a good caption, he puts in the effort to write a proper caption. The average price that he earns by each paid post ranges between $466,100 and $776,833.

Ariana Grande is an American singer, songwriter, and actress who has won many awards. Her ground-breaking t single, thank you, next, uploaded two years ago, had been on every prominent billboard all over the world. The music video shot her up to the second position in the list of the highest-earning Instagram celebrities since 2019. Her feed includes her performance pictures, photos with other stars, and just images fitting the global popstar description. Brands would leap onto any opportunity to get them to endorse their products.

It is because a simple post on her feed would help you reach all her 225 million followers. The estimated money that she makes for each advertisement or post ranges between 391,530 USD to 652,550 USD.

Dwayne, or popularly called Dwayne The Rock, Johnson is an actor in Hollywood. He initially gained popularity when he had started as a wrestler in WWE, the famous TV show. You wouldn’t be surprised when you look through his feed as it mostly contains pictures of him working out or family pictures. No doubt, he is renowned for his solid build and is known for his role in action movies. This attribute makes him the perfect influencer for the brands that are associated with fitness and health. With every product he endorses on one of his feed posts, he earns around 383,014 to 638,356 USD.

Kylie Jenner and the whole extended family quickly rose to their fame because of the show named Keeping up with the Kardashians. Each member of the family, of course, has their set of achievements. Kylie is an integral part of the family and the clan of Keeping up with the Kardashians. She is one of the most highly influential people here in the industry of beauty. She is also the owner of her beauty brand named Kylie Cosmetics. Kylie is thus one of the most celebrities and an influencer. At one point in time, she had even held the record for having the most-liked post on Instagram, and even now, she is one of the top twenty people whose instagram posts are most liked.

Her feed generally has pictures of her personal life and her work and many pictures with her baby and partner. She charges over a million dollars for each product in every post that she endorses. She generally advertises products from luxury beauty and fashion brands. Her average earnings for every post range around 375,224 USD to 625,374 USD.

Her feeds contain photos from her usual pop life, including selfies, pictures from events, or friends. Some of her posts are political or surround the issue of Women’s Rights. It is commonly believed that celebrities don;t have a high rate of engagement. She breaks this norm with her high engagement rate of 2.12% in all of her posts on Instagram. She is mostly seen to be advertising products from lifestyle, fashion, or beauty brands. Her average earning for every single Instagram post comes to a range of around 369,217 USD to 615,361 USD.

Other famous Instagram celebrities who didn’t quite make it to the list are Kim Kardashian, Lionel Messi, Taylor Swift, etc. Their earnings per post fall in the range of a few hundred thousand dollars. Businesses and brands always try to build their marketing strategy, and working with influencers is crucial. Budding brands prefer working with smaller influencers are they are a little more affordable than more prominent celebrities. But luxury brands have bigger budgets and want to reach millions of people by investing in endorsing through celebrities.