Why Are More And More Teenagers Becoming Vegan? 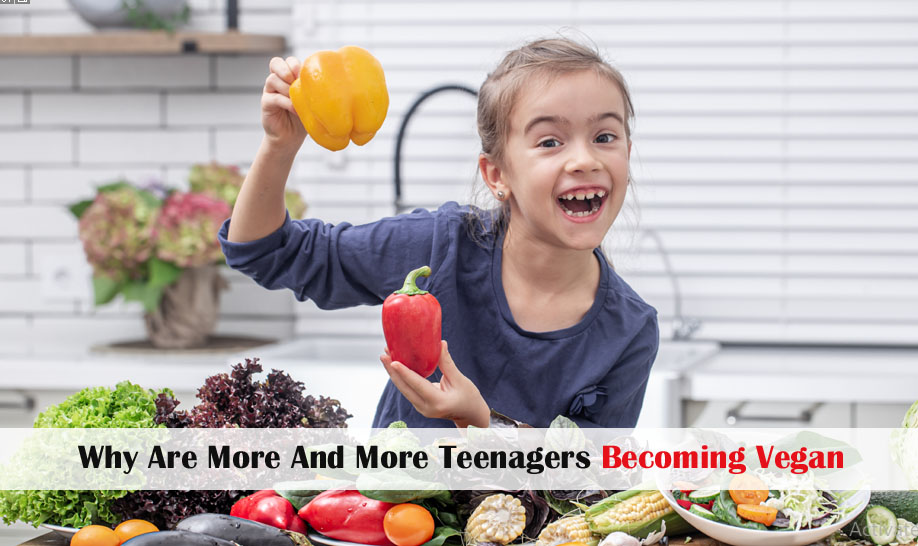 Veganism is a practice that is becoming increasingly popular, especially among the younger generations. Even though more and more people are learning about it, there’s still a lot of confusion surrounding the topic. Many believe that veganism is the only sustainable diet in the future, and many others think that veganism cannot completely sustain a human body. Teenagers are a group that is increasingly adopting the vegan lifestyle. Guardian reports that there’s about 350% rise in the number of vegans in the last decade in the UK and almost 600% rise in the USA. Nearly half of the vegan population is 15-34 age, and a significant chunk of that number is teenagers. So the question arises why are so many teenagers choosing veganism? There are quite a several reasons for it, let’s look at them

Due to early introduction to the internet and an abundance of knowledge at a click’s distance, teenagers become socially conscious. They are learning how the climate is irreversibly changing for the worse and how climate change will affect them the most since they will have to live through its most dangerous stages. The meat production and packing industry are incredibly responsible for degrading the environment. Worldwide, factory farming contributes to about 18% of all greenhouse gas discharges. The industry has a vast water print. It takes about 2000 gallons of water to manufacture 1 pound of beef, which is plenty higher than the waterprint of plant-based foods. The animal farming industry is also responsible for land, water, and air pollution.

Livestock farms are cruel to the animals. Eating meat doesn’t only ensure that the animal gets killed for food. It also means that the animals are treated horribly for their entire lives before getting killed. A lot of inhumane practices go on in animal farms. Thousands of animals are cooped up in such small cages that they can barely move; thus, they start behaving abnormally and lashing out at other animals.

They also develop skin disease and suffer leg problems due to unhealthy postures because of a lack of resting and moving space. Meat-producing animals are regularly force-fed so that they grow fatter. Many farms remove the cows’ horns, cut off beaks of chicken, and castrate animals without giving them anesthetics. The living conditions of these animals are horrible and unsanitary. Witnessing such animal cruelty can make many people stop eating meats, and teenagers are particularly affected by it.

Despite many people thinking otherwise, there are quite a lot of health benefits of turning vegan. Vegans have a lower chance of death from having heart attacks or cancer. Several types of meat are carcinogenic; plant-based foods are not. Lower levels of cholesterol, blood pressure, and BMI are more benefits for which younger people are adopting vegan foods. Plants have many nutrients and minerals in them, and if you plan your vegan diet well, a well-balanced meal will do you wonders. Vegans also claim that they are more energetic than their non-vegetarian peers.

The networking sites and apps have brought on a massive wave of change as far as veganism is concerned. Vegans have formed Facebook groups, Instagram pages, blogs about vegan diets and spread information about everything good about veganism, including health, climate, and animals. More teenagers are coming across these pages and are looking up veganism, many of whom end up changing their eating habits and then talking about it, thus introducing even more people to the practice. Social media also makes veganism seem a desirable way of life, which attracts people. Also, there’s a sense of moral superiority that comes with it, and that’s also one of the reasons, among others, that makes people vegan.

Many celebrities turn to veganism, including ones that have a significant number of fans in teenage demographics, like Ariana Grande, Miley Cyrus, Luke Hemsworth, etc. This makes people consider veganism for themselves too. Many teenagers incessantly follow their favorite celebrities; thus, celebrity culture influences a considerable number of people. There is also the desire to emulate rich people and their eating habits, making people change their meals. Natalie Portman, the oscar-winning actress, recently worked with and released a documentary about veganism and animal farming. Since celebrities have a huge social platform, many people listen when they have to say something.

Watching documentaries is like reading non-fiction books, only a lot quicker. Many people watch documentaries, and there are quite a few documentaries about veganism and animal farming available on streaming services like Netflix and Amazon Prime. When asked what made teens turn to veganism, a section of them reported having watched such documentaries, namely Cowspiracy, Earthlings, Dominion, The Game Changers, etc., which shifted their perspective on animal husbandry and McDonald’s burgers. Documentaries reveal the truth about what goes on in animal farms, and a lot of times, it is unwatchable and cruel. Films like Okja by Academy Award-winning director Bong Joon-ho also shed light on such issues.

A lot of Instagram influencers and YouTubers are directing teenagers towards being Vegan. There are channels on YouTube where people talk about veganism and explain how to maintain healthy, well-balanced diets, what extra supplements to take, and what Many teen viewers should avoid other animal-based products. Viewers are learning the benefits of eating fruits and veggies from their favorite YouTubers.

Ever since people began demanding more vegan foods and options, many businesses have started to answer those demands. A lot of restaurants and food joints have started including vegan options in their menus. Vegan alternatives to dairy products, like almond and oat plant milk, mock cheese, and yogurt, are readily available. For people who miss eating meat, mock meats made out of plants have been invented. Faux leather and faux fur are also becoming popular. Since everything is very accessible to the general public now, significant growth in the vegan population has been observed.

This is one of the more harrowing reasons, but it is no secret that many teenagers struggle with body image and beauty standards. Teenage girls start dieting and taking laxatives to maintain a small shape and low weight. Veganism promises low weight and low body mass index than non-vegetarians, thus attracting many teenagers who want to lose weight.

Puberty is an age where the mind and body of a person are going through critical changes. Puberty is not easy on everyone and distresses many teens, and many hormonal changes are going on as well. It is also when a person starts establishing an identity of their own, separate from family and friends. They start forming their own opinions and belief systems and expressing their personal autonomy over their life, including their body and the food they eat.

Thus, it’s not surprising that teenagers are choosing to be vegan. Teens are also moody and have a desire to go against the status quo, which isn’t a bad thing at all; establishing control and autonomy are quite important as well.

They are the new generation –

There is a generational divide that we often observe between Gen-Z, Millennials, and older people. Older people are more bound by their habits and tradition whereas younger people are not. A sixty-year-old who has always eaten meat products throughout their life, who has had turkeys for every thanksgiving, probably wouldn’t suddenly change their eating habits and go against traditions. But the same things don’t hold back 16-year-olds.

Since teenagers aren’t yet set in their ways, and beliefs like most adults are, they are more likely to question the norms and choose alternative lifestyles. One thing’s for sure, veganism is here to stay, and if the recent data are anything to go by, it’s only going to increase in popularity in the coming years.