Black Lives Matter And The Evolving Role Of Social Media 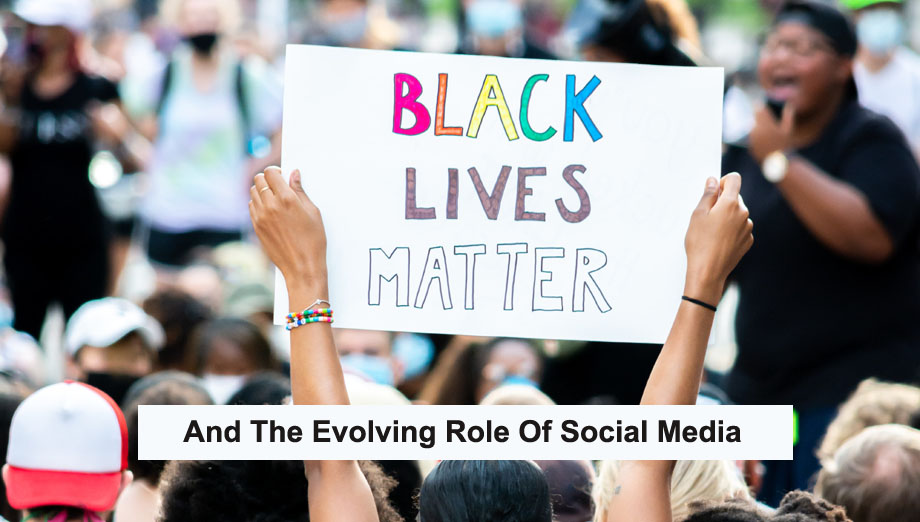 For decades, social media has established an ever-growing potential to promote, share, and engage the largest of audiences with everything from the latest fashion trends to the most critical of socio-economic issues. Unlike traditional media platforms, the wide variety of social media allows people to post the reality and everything they experience in their daily lives without any filters.

Despite having a conflicted reputation, it is now apparent that social media platforms are revolutionary tools for change. One such example is the impact of social media on the Black Lives Matter Movement. The movement expanded immensely due to the use of social media at that time.

The Black Lives Matter started trending online when Alicia Garzia shared the hashtag ‘#BlackLivesMatter’ on Facebook after the murder of a young black boy in 2013 named Trayvon Martin. George Zimmerman was acquitted for the murder of Trayvon.

The hashtag started to get popular and was used to spread awareness of the systemic injustice faced by members of the Black community. The movement garnered more importance after realizing police brutality faced by African Americans in 2014. This happened after a white policeman killed Michael Brown, a black teenager, in Ferguson, Missouri.

The main aim of the movement was to raise the question that these instances are not just an instance, but they are a part of recurring issues faced by the Black community in America, which often gets overlooked.

The Black Lives Matter Movement earned national traction in 2014 after the murder of Brown. The hashtag was used 1.7 million times on Twitter in just 3 weeks. This took place after the grand jury refused to hold the police officer responsible.

Though there were conflicting viewpoints regarding the killing of Michael Brown that whether he was approaching Darren Wilson or surrendering. Both the grand jury’s decision and Brown’s death led to protests across various parts of the country.

Even the movement and hashtag being associated with police brutality against African Americans made no changes to public policy to address the issue.

Michael Brown’s death gained support for the Black Lives Matter (BLM) movement and prompted many to use social media to debate the role of policing and the state of race relations in the United States. After the incident at Ferguson, national attention turned to the killings of other Black boys and men, such as Eric Garner in Staten Island, New York.

Some argued that the deaths of Michael Brown and Eric Garner were a race issue, short and straightforward. Others shared a view that their deaths had nothing to do with race and that the police were the ‘‘real’’ victims.

However, the whole trajectory of the movement changed in 2020, post-murder of George Floyd. For those who don’t know the full incident, George Floyd was an African American who was brutally murdered by Derek Chauvin in his custody for allegedly using a counterfeit $ 20 bill in Minneapolis, Minnesota.

A video was viral where Chauvin could be seen kneeling down on Floyd’s neck while the latter was lying face down, gasping for air. The gruesome incident was captured in a video and took place in a time span of 9 minutes where Floyd repeated many times he couldn’t breathe while the other three officers present there watched Floyd being unresponsive and eventually dead.

When this heart-wrenching video became viral on every social media platform, the Internet was in an uproar. The hashtag # BlackLivesMatter once again was used around 50 million times on Twitter alone in a week after Floyd’s murder. The movement ignited on the Internet also had a huge impact on the investigation for the murder.

The movement also led to protests in all 50 states, supported by major corporations and local government. This also led to awareness towards other victims of police brutality whose cases had gone unnoticed.

Hashtags such as #BlackLivesMatter, #ICan’tBreathe, and #BlackoutTuesday, and were used as tools to provide people with resources to become more educated on issues of systemic racism as well as to raise solidarity towards the BLM movement and awareness.

The use of social media was made to bring a change in public policy regarding police brutality, as it was used to inform people of petitions and protests concerning the BLM movement. Donations and a million signatures on petitions were made to bail many of the protesters arrested and open investigations for other African Americans who were the victims of police brutality.

Apart from this, the defunding of the police movement also gained popularity due to social media. This movement was meant to address the issue of police brutality to its core by reducing the fund allocated to police and using that money towards the things needed by the people of this community, such as housing, education, etc.

We are used to seeing pictures of people going on a vacation or posing with their pets, but social media is much more than posting just pictures. A hashtag may seem insignificant to some people, but it is a start. Social media is a powerful tool impacting our lives and social movements. We can see many social movements being shared and discussed amongst millions on the social media platforms like Facebook, Twitter, etc. It allows people to learn and get aware of important topics and motivate them to make a change.

People feel like they can have honest political discourse through social media because it is not overseen by organizations. Consequently, it is a tool for formulating opinions and judgments about different groups and issues. Younger generations undoubtedly favor social media as a news source whilst older generations tend to favor the more traditional media sources for their updates.

Many students have said that they don’t follow the news often. Hadn’t it been due to social media, they would have never known about the murder of George Floyd and the entire history behind the Black Lives Matter movement.

Moreover, social media has also become a significant platform to share resources, petitions, and links for donations. This allows people to actually take action about something they feel right. While official news outlets may share links or information about such events, they fail to offer effective solutions.

Now, people can actually contribute instead of just watching the story and thinking, “ I wish I could do something,” and moving on.

Social media has also seen significance in arranging protests. Six teenage girls met on Twitter in America. They created an Instagram account named teens 4 equality which was used to organize a protest in Nashville for the Black Lives Matter movement. The account had gained many followers, and the protest itself was attended by 10,000 people. Had it been possible without social media to mobilize such a massive crowd for a protest?

The protests proved significant, and Chauvin was charged with Second-degree murder. The other three officers present there were charged by abetting and aiding.

From social media response to protest mobilization to legal action, there is a strong chain that indicates the influence of social media is not to be overlooked, either as a news source or a platform for activism.

That isn’t to suggest that social media is the only platform for activism, nor is it a perfect one. As much it is beneficial, it also has its own drawbacks – the scope for fake news and the problem of performative activism, to name a few.