How To Protect Your Children From Social Media Bullying 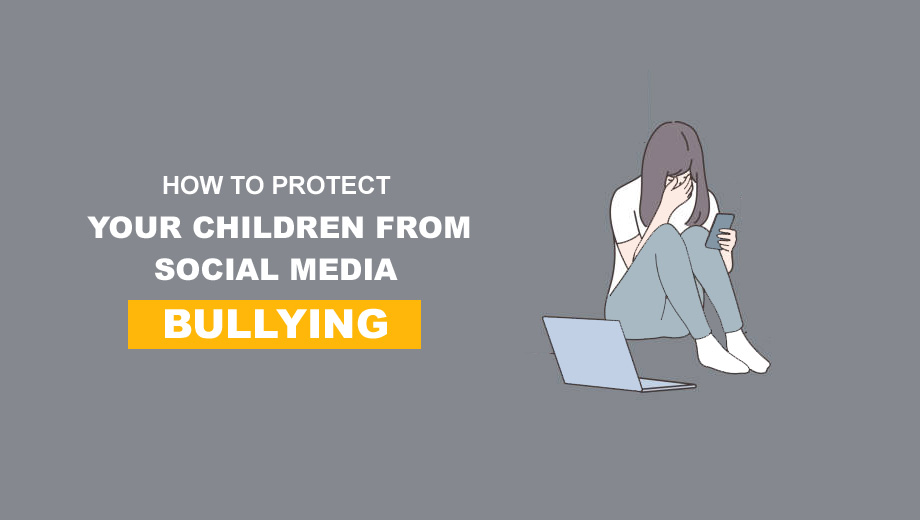 There was a time when bullying was almost entirely limited to classrooms and schoolyards, wherein ideal situations can be discouraged or diffused effectively by teachers or other adults in authority.

However, with the rise of the digital age, bullying was no longer restricted to classrooms as it moved to digital space, making it even more destructive and insidious in the process. The time spent by children on digital space is increasing more and more as technology and the internet have become a routine part of their recreational activities and education.

This increasing dependency on technology translates to increased chances of having to deal with or encountering a cyberbully, and as a parent, it is not simple to decide when to step in as a parent. First, children use technology for different purposes than adults. They send text messages and play games at a young age and have continuously connected devices to the internet.

Showing involvement in your children’s cyber world can be as significant as being involved in the real world. Due to the fact that awareness of cyberbullying has grown, parents have learned how to tackle it effectively. Following are some suggestions on what you can do to protect your teen from cyberbullying.

Cyberbullying is a form of bullying where technology is used to threaten, harass, target, or embarrass another individual. It is something that occurs among younger individuals. When an adult is involved, it can be cyberstalking or cyber-harassment, which has legal consequences and can include jail time.

Every so often, cyberbullying can be found easily, sometimes in the form of a tweet, text, or a response on a social media platform that is mean, harsh, or even cruel. At the same time, Other acts can be less evident, like publishing personal information such as videos or photos to embarrass or hurt another individual or impersonate the victim online. Some kids reported that a fake webpage, online persona, or phony account was made with the only purpose of bullying and harassing.

Sometimes, cyberbullying can also happen accidentally due to the impersonal nature of emails, IMs, and text messages, which makes it tough to identify the sender’s tone; a personal joke by someone can be a hurtful remark to another. Having said that, a repeating pattern of texts, online posts, email is hardly ever an accident.

Since a lot of teens can feel hesitant to report an incident of bullying, even to their guardians, making it impossible to get an exact number of teens affected by cyberbullying. Even so, more than half the teens surveyed in some studies reported having experienced abuse through digital media and social media.

What are the effects of Cyberbullying?

Bullying on today’s date can happen anywhere, whether it is at home or school. Teens that are picked on may feel like they’re getting blasted non-stop, and there is no escaping from it. So long as teens have access to a computer, phone, or other digital devices, they are potentially at risk.

Victims and even bullies themselves after frequent, long-term, or severe cyberbullying have a greater risk of depression, anxiety as well as other disorders that can cause stress. In some cases, teens have committed suicide. According to experts, teens who were bullied and those who bully themselves potentially are at a greater risk of developing suicidal thoughts, attempt suicide, and complete suicide.

According to research, individuals who were bullied can suffer from a wide range of issues such as depression, low self-esteem, anger, frustration, and fear. Victims often start to isolate themselves, isolating themselves from their family, friends, and the circle that supports them.

Several teens and kids who are cyberbullied hesitate to tell their parents or teachers regarding their situation. More than often, they feel ashamed of the social stigma or fear from authorities. Signs of cyberbullying differ, but it can include:

What you can do as a parent

If you find that your teen is being bullied, begin by offering them your support and comfort. Talking and sharing about any bullying experience you might have experienced in your childhood can help them feel less lonely.

Let your teen know and understand that it is not their fault in any manner, and bullying says more about the bully rather than the victim. Remind your teen that they are not alone and praise them for doing the right things. A lot of individuals experience bullying at some point in their life and reassure them that you will figure out what can be done together.

Let someone in authority, such as the school nurse, a counselor, or the school principal, know regarding the situation. A lot of school districts, schools, and after school clubs have rules in place to help deal with cyberbullying. These rules can vary by district and state. Before you decide on reporting the incidents, talk to your teen first and make sure that both are comfortable with the plan before going ahead with it.

Encourage your teen not to respond to cyberbullying, as all it does is make the situation worse. Make sure that you have the pictures, messages, as well as texts as those can be used as a piece of evidence with the school, the parents of the bully, employer, or the police. You should also take and save the evidence as prints to keep it just if you might require it in the future.

In addition, you can also try

If your teen agrees, you can also arrange for a meeting with a therapist or a counselor at their school who can cooperate with your children or/and the bully.

Cyberbullying is a severe issue that should be tackled with care. Similar to any other forms of bullying, it can leave lasting effects on the victim. Teachers, parents, and children must work together to make the internet a safe place. Teens should be educated on what they can do and who they can talk to even if they encounter a bully.