How Is Social Media Affecting Teens In The US? 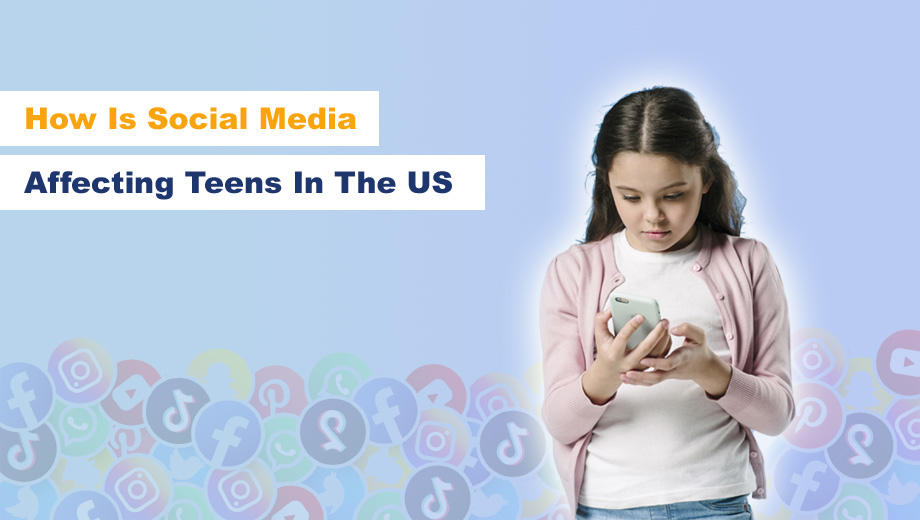 Today’s teens are fond of Instagram for its primary and easy-to-navigate layout. Sharing pictures with their friends and family to make fun reels and stories is easy and very popular on Instagram. Teens regard it, besides Snapchat, as one of the most convenient ways to keep up with their friends. This article is all about how the content on Instagram influences teens and how it affects their mental health.

According to recent studies, teens spend more than 7 hrs on Instagram when they are not in school or sleeping. They are mostly glued to their phones, stalking people like celebrities and various other influencers.

While it is an excellent way to stay connected with their friends and keep up with the world, the excessive addiction to social media is not only exhausting but can also take a toll on teen’s mental health.

According to the UK’s Royal Society for Public Health, the mental health of more than 1,000 teens and youngsters is adversely affected because of social media apps. And social media addiction is one of the leading causes of anxiety, depression, online-bullying. It also leads to FOMO (Fear Of Missing Out) in young teens.

What we see is not always right!

It is effortless to access the whole wide world, with just one tap on the phone. And so, it is straightforward for teens to compare themselves with others. There is a constant struggle to keep up with their peers. They foster negative body images and disturb their sleeping schedule resulting in a lack of interest in academics. However, what they see on Instagram, is many times not a reflection of reality.

Teens often physically compare them to other famous models, which is a big issue with Instagram and other social media platforms. They feel They do not healthily use these applications, and the information they read and see is not helping them in any way. There need to be more fitness and well-being influencers on Instagram and other apps than fashion influencers, who divert teens in the wrong direction.

The problem with today’s teens is, they like and want everything to be aesthetic. They have the desire to look dazzling and also enjoy their profiles to look captivating. Being aesthetically pleasing should not be the goal of one’s life. Teens and young adults need to focus on their future and their school grades. By that, I do not intend to be forceful on teens, but they need to realize that social media apps were discovered to stay connected with family and friends and use social media as a recreation source.

When teens view the profiles of celebrities and Instagram models with a decent number of followers, they fall into the trap of social media and tend to increase their followers by unfair means. It is believed that if you already have too many followers, It is easier to gain more followers.

This concept is genuine to some extent. Many teens buy fake followers, which are usually bots that just make your Instagram profile look attractive. However, these fake-followers do not help in any engagements.

For a fact, many celebrities also buy followers to make their profiles look presentable on social media applications. The particular reason behind this circumstance is that gaining organic followers and attracting people to your profile is not easy. Apparently, famous celebrities like Kylie Jenner, Justin Bieber, Badshah, etc., invested a lot of money in buying followers. Basically, purchasing few followers on any social media application might boost up your business but not for a long time. With all the benefits and hype of buying Instagram followers, many disadvantages come along with it.

Buying followers for Instagram, Youtube, TikTok, and other social media applications is the new trend among Gen-Z. Social media is more about competing with your friends and less about recreation and fun. This not only demotivates the people with fewer but organic followers, but it is also bad for those influencers who work hard to make content and wait patiently for their follower count to increase.

Teens also have this urge to look aesthetically pleasing because, when they scroll on their feed, everything and everyone looks noteworthy, making them question themselves. This has a considerable impact on their confidence. A very little do they know that everything they see on social media is now edited.

As technology and science progress with time, it is easier to stay connected with people and keep in touch with peers and family. When social media didn’t exist, people still used to keep in touch with their friends by meeting and hanging out with them. But now, the most popular trend is texting via Instagram.

When the conversation doesn’t happen in person, you don’t hang-fire and can see what and how your words affect the person. Knowing a person and connecting with them requires more effort and direct communication in person. When anxious about making a conversation in person (talking) with their species, which is the primary means of communication, i.e., cyber-bullying is considered the most dangerous side-effect that comes from teens communicating indirectly.

Teens sometimes say such things online, which they wouldn’t even in a million times conceptualize saying, to anyone’s face.

Studies say that girls, especially young teen girls are more vulnerable to the downside of social media. According to research, affinitive aggression is a side effect of insecurities. When one feels awful about one-self, one tends to put others down by posting harsh statements and comments.

We worry about the impractical ideals that photoshopped magazine models give to today’s youth, but what happens when your profile doesn’t represent the person you actually are?

Peer acceptance is quite an essential aspect for adolescents, and most of the time, they care about image and status much more like politicians and prominent people in the business.

Adding to it, teens today get the polling data of how many ‘likes’ they get, which they consider necessary. And to them, it is serious. Teenage girls first sort their pics out and tend to post the best snap to get maximum likes. Even boys seek attention by revolting against other boys. They often gang up and bully other people.

Teenage years and the early twenties, in particular, are the years in which you are profoundly aware of the contrasts between how you appear to be and how you think you are. It is called the ‘imposter syndrome’ in psychology.

As you grow up and obtain more enigma, you begin to comprehend that you actually are good at some things, and then is the time when you see the gap hopefully narrowing. But if your deepest darkest fear is that you aren’t as good-looking as you perceive yourself to be, and then you grow this need to look that good all the time, it’s enervating and practically unjustifiable.

And everybody likes confident people. Self-esteem comes from integrating who you are and accepting yourself the way you are. It gets harder to feel good about yourself when you pretend to be someone you are not.

Stalking and being disregarded

Another significant change that has come with technology and smartphones is that we are never really by ourselves. Teens update their status, share whatever they’re watching, taking note of, and reading, and have applications, allowing not only their friends to know their specific location on a map in the least time but also permitting strangers to view their site.

Even when a person is not trying to contact anyone, he/she is still never out of reach of a text message. Which often results in youngsters feeling hyper-connected with one another. The conversation never stops, and it seems like there’s always something new happening with someone.

Astonishingly it is yet easy to feel forsaken in the middle of all that hyper connection. Teens now know with bleak certainty when they’re being disregarded. We all have smart-phones, and we all acknowledge things pretty quickly, so when we twiddle one’s thumbs for a response but are left on a stand-by, the tranquillity is almost deafening. And such still treatment can be a prudent insult or just the unfortunate side effect of an online adolescent relationship that is intense during the initiation but then dissolves with time.

Even when the conversation doesn’t end, being in a constant state of hang-fire can yet exasperate uneasiness and anxiety.

Parents need to keep a check on their kids’ screen-times and understand the impact on teens. Teens need to be educated on how to use social media safely and responsibly and what are the consequences of being irresponsible while using social media.

How to resolve the issue which is connected to teens and social media?

It is not that difficult to control teens. Parents and schools can play an essential role in saving the youth from the wrath of social media. They can initiate doing this by staying connected with their children’s hang-fire can and making them understand the pros and cons of social media. Parents must guide their children and tell them that everything they see on Instagram and other social media apps isn’t always real.