Why Is Instagram Most Sort After Destination For Influencers? 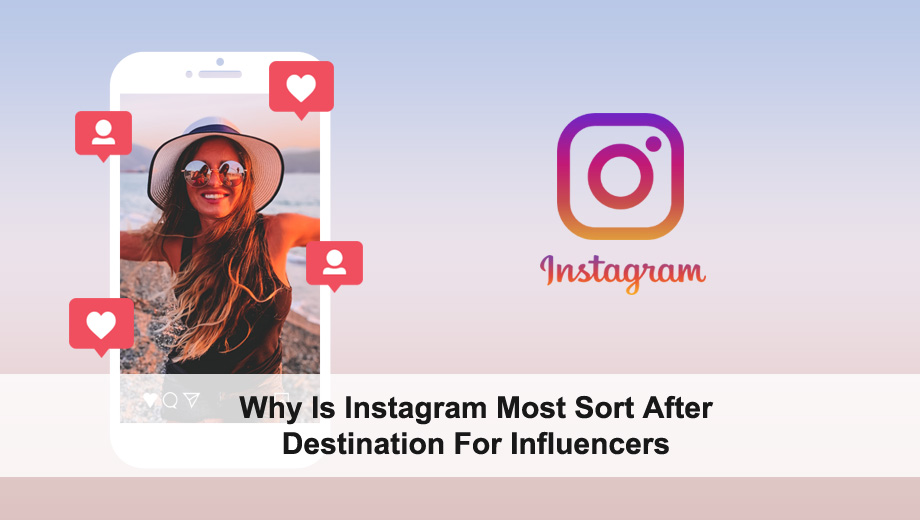 Influencers are the people who have the caliber to affect the lifestyle decisions of people mainly because of their personality, fan following, authority, knowledge, or position. Every influencer has a different niche and thinking, with which he/she engages actively and influences the audience of the same niche. They are signed by renowned brands to fulfil their marketing objectives. Brands collaborate with them to expand their reach; hence, they work as an asset to brands.

They continuously post about it on various social networking sites in order to generate large followings of people who are actively engaged, enthusiastic, and pay attention to their ways and views, wherein Instagram has been widely accepted by all the influencers.

How do influencers work?

Nowadays social media influencers have elevated social media marketing to new heights. These accounts have amassed millions of followers, making them smartphone celebrities. Their areas of content themes and expertise can range from parenting, nutrition, and health to beauty, fashion, and gaming.

Because of their popularity, marketers tend to partner with influencers to promote their goods and services through sponsored posts and gifting, and to use their social media accounts as an advertising asset.

This is not a new thing for several marketers; campaigns are running with elements of influencers for years now, due to which they are so effective for the brands focussing their marketing efforts on social media customers through these influencers.

Brands may be able to connect with consumers by tapping into these social media platforms. People are far more accepting of the promotions and recommendations from these influencers than they are of promotions received through other channels since they have a high level of admiration for them.

According to the study, more than 45 percent of the world’s population, or 3.484 billion people, are active users of social media..

The study also found that more people are using mobile devices to access social media. As a result, it is clear that using Instagram and other social media sites on their phones has become much simpler. Despite this ease, Instagram remains the most successful site, with 84 percent interaction.

Instagram has a monthly active user base of 1.15 billion people. Instagram’s user numbers are hitting new heights, thanks to the relentless rollout of exciting updates and the pandemic’s impact. According to a report, photos shared via Instagram on Facebook receive more interaction than those shared directly.

Instagram is also, according to the latest predictions from Social Media Today, the world’s fastest rising social networking site. These figures clearly demonstrate that Instagram will assist you in effectively showcasing your brand around the world.

According to the report, Instagram is used by nearly half a billion users on a regular basis. However, it’s not just the huge number of users who draw brands to the social platform.

So, why is this media-sharing platform so popular amongst the influencer community? In recent years, the rise of influencer marketing has evolved the way businesses appeal to audiences.

Influencers can be found in the middle of various platforms, but any marketer knows that Instagram till now is the best digital hub and also nowadays brands are paying a huge amount to influencers to promote their products and services and most of this investment will be generated on Instagram.

These influencers influence everyday consumers to like certain products or choose certain services. It has been found that micro-influencers (users with anywhere between 1000 to 100,000 followers and high engagement rates) are one of the best ways for brands to drive their sales. It was also said that more than 90% of the influencers prefer Instagram as their networking platform.

Other than Instagram no other social media platforms have the reach nor the natural capacity to facilitate brand-sponsored posts. From all perspectives, Instagram is undoubtedly the center of influence marketing.

Here are a few reasons why Instagram overpowers other Social networking sites:

So, to reach a conclusion about how Instagram has got the social game so right that most of the influencers prefer it, the main reasons we got are: –

It provides better functionality for the sponsored content, for example, tagging in the posted contents like pictures and captions, swipe up functionality to open up the joined link, bio links, etc.