Why Is Tiktok So Popular Among Gen Z? 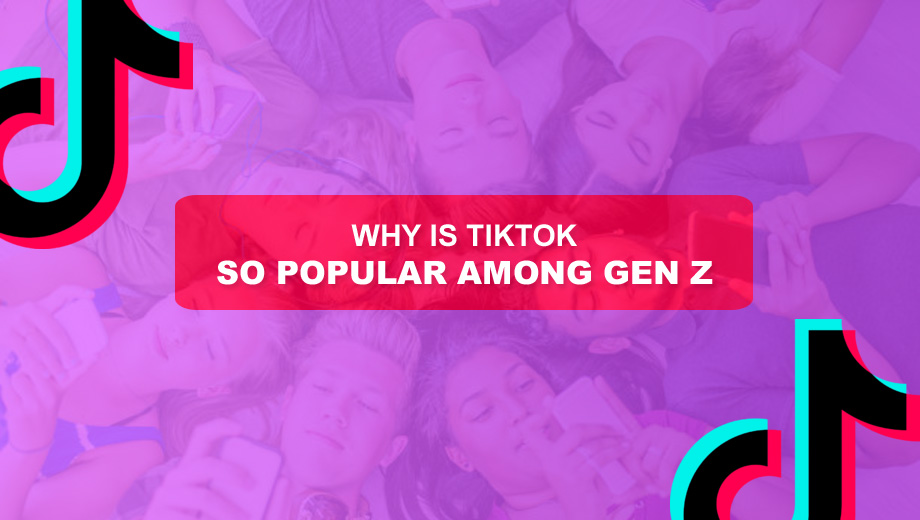 Every generation has its own way of combining media and friendship. While you’ll see most of the Millenials on Facebook, Instagram, and Whatsapp, Gen Zs have their own favorite TikTok. Generation Z refers to the users born after 1996. TikTok has become very popular among Gen Zs as this platform gives them a chance to show their creativity. That becomes the reason behind the popularity of Tiktok and an 800 % rise in its user base with over 100 million users only from the USA.

Before we see why TikTok is popular among Gen Z, let’s see who invented it and how it became a huge success?

When was Tiktok invented, and by whom?

In the year 2014, an app named Musical.ly became extremely popular among the 14-18-year-old audience. The app was created to combine videos from users and popular songs and dialogues. Basically, the app was designed to make videos where people will lip-sync and dance on a given song, music, or any sequence. By 2017, Musical.ly had more than 200 million users.

After the app gained popularity, a Chinese developer ByteDance, created an app that was a rival to Musical.ly, named Douyin. The app was initially launched in China and later renamed Tik Tok for better appeal globally. TikTok also gained huge popularity, and in late 2018, it acquired Musical.ly for $800 million. After the acquisition, the users of both the apps were consolidated under one app named TikTok. And in no time, TikTok surpassed Whatsapp, YouTube, and Instagram to become the most downloaded app on the Apple Store.

TikTok is named Douyin in China and is available in 154 countries. The popularity of the app, along with then-President Donald Trump’s order to ban the app, has brought TikTok to the mainstream or at least in the eyes of the older generation. After there was a lockdown in the country, Tiktok became an escape for the homebound Zs.

Soon after this, the app became the source of news and information also. The summer when Zs disrupted the attendance at a campaign rally for President Trump was organized through TikTok. When you spend time on TikTok before the election, you will see many videos supporting Democrats and Republicans, including campaigns meant to get these young voters to the polls. More precisely, Tiktok has left no stones unturned to tap on everything that appeals to the Zs, and they, in turn, have rewarded it accordingly.

Still, a question arises, what makes TikTok so popular among Gen Z, and what were the reasons behind its popularity?

A platform to showcase talent and creativity

TikTok is a unique platform that lets Zs create short videos, such as dancing videos, lip sync videos, etc. They don’t need any tutorials or classes to get started. They just need creativity, so TikTok is a platform “for them.” Another thing that makes this app popular is personalization because youngsters love things that are made just for them. Youngsters who were extremely creative and never got a chance to showcase their talent got very attracted to TikTok. Also, the whole process is very easy, that any user can edit the videos without any complications. As we all know, Gen Z has grown up with their phones, so TikTok was a piece of cake for them.

Zs felt it easier to go viral on TikTok

When you open TikTok, you’ll see many short videos on the feed. Most of them depict school life, romantic crush, friendship, and such things. Now for people over 20 years of age, this content has no relevance, but for everyone falling under Generation Z, it can garner millions of likes
and views.

Unlike other social media platforms like Instagram and Youtube that use particular and strict algorithms, TikTok is not so strict with the algorithm. Hence, it’s easier for anyone to get viral on TikTok. On TikTok, one doesn’t have to wait to gain thousands of followers to get their video seen.

Other than this, Zs felt it easier to connect with people via TikTok as they could reach like-minded people who like each others’ video. Many TikTokers have accepted that the platform gave them the freedom to express their feeling, which otherwise, they couldn’t express. Zs started following attractive, expressive, and funny people, which gave them confidence that they can also do the same.

No pressure of any sort

TikTok lets youngsters be simple and real. From wearing night suits to driving a luxury car, people have created every sort of video on TikTok. One can pick up anything that suits their environment and potential. There’s no pressure on creating polished and luxury videos. Also, the videos are super short, so Zs can carry out everything smoothly without stressing on the details as the Millenials do on Instagram and Facebook.

So, in a world where well-produced content is appreciated, Zs found their own way of engaging with their own generation on a platform that’s meant for them.

As the platform is growing and evolving, it’s capturing the attention of both brands and celebrities. Many famous celebrities joined TikTok and gained millions of followers within a few weeks. Along with celebrities, entrepreneurs are also adopting marketing strategies with TikTok. The reason behind it is the variety that the platform offers. You can post about anything from humor, entertainment, fitness, beauty, food, etc. In simple words, TikTok is offering exposure to every field to adapt their content and convert it to a short-form video model.

Brands are even adopting the strategies to buy TikTok followers, Tiktok views, and likes to increase their reach among the masses.

The youngsters share and create viral content because they want to share what made them feel good. According to marketing consultants, Gen Z is more focused on sharing and post what they feel the best about. Due to the platform being raw and comedic, most of the youngsters can relate more to it.

The demographics also play a huge role here. Majorly TikTok has an audience of age group 14-20, and most of the creators also belong to this age group. Due to this fact, when Zs open their feed, they find everything relatable that we being adults, do not. This relatable content makes them scroll the app for hours, and they end up saying, “that’s so like me.”

These were the basic reasons behind the popularity of TikTok among Generation Z that led to the huge success of the platform.

What’s the need for TikTok?

Sometimes when a new app emerges in the market and is accepted by the audience, it can become hard to figure why exactly it’s needed?

When Instagram hit the market, it was considered merely a photo filter app or a place to upload pictures, but with the increasing popularity and diversity, it soon became a marketing tool. Now, brands with reasonable marketing budgets set a specific budget to promote their brand digitally on platforms like Instagram.

When it comes to TikTok, it’s hard to say anything about its future, but looking at the present scenario, it very well serves the needs of the vast market of people looking for short-entertainment and relief for a few minutes during the day.

How safe is TikTok, and what measures should parents take?

Not only TikTok, using any other social media can be risky. But it’s possible for the kids to use TikTok
under the supervision of parents or adults. Your account is private when you sign up as 13-15 years old, only friends can comment on the videos, and no one can duet with your videos. Users over 16 years can use direct messaging and Livestream, and those over 18 can buy, receive or send virtual gifts.

Parents can use Restricted mode for control and Family Safety Mode to pair the account with their kids to look at all the settings and activities. In order to make everything more secure, turn all the settings to friends instead of “Everyone.”

Every few years, a different platform or app redefines the trend of social media, and the past few years were definitely taken over by TikTok. Despite everyone saying it’s a complete waste of time, TikTok set the bar higher and proved to be unstoppable. What made TikTok different from any other social media platform is that it gained popularity despite being the undiscovered territory for anyone over the age of 25.

With the changing times, TikTok has also become worth joining for anyone having a brand due to its versatility and reach among the masses.