How Does Generation Z Use Technology And Social Media? 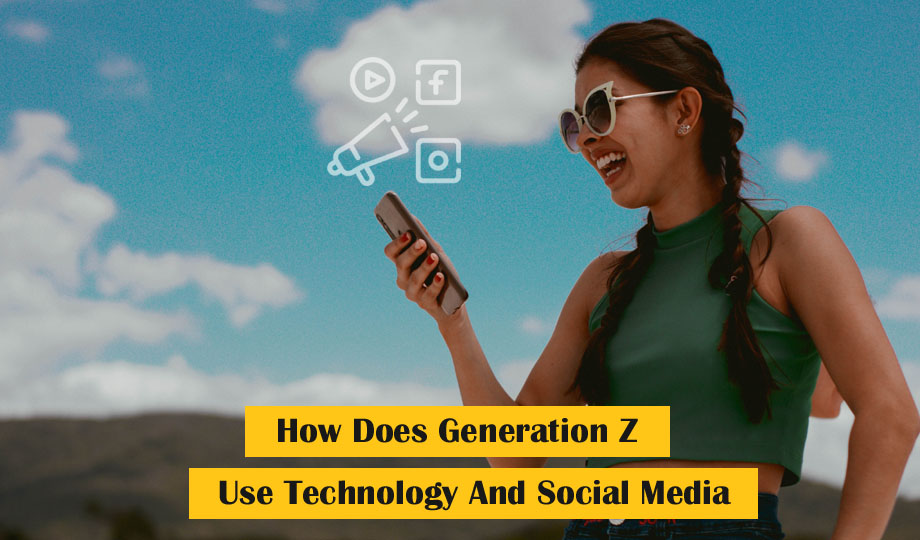 Being the technologically freak young 21st-century social media has become an integral part of our daily lives. On average, a person spends approximately about 5.4 hours or so on social media, surfing, chatting, shopping, etc. For the youth their day starts by being online and ends with being online while Gen Z does everything online that you can’t even think of. While Gen X didn’t even know, and they still don’t know what social media is because, for them, mobiles and telephones were something mind-boggling for them.

They could not digest this sudden surge in technology and forget about social media; they couldn’t even think of something like this. Gen Y was a bit more techno-savvy and mature enough to accept the change or advancement that came in during their time. Social media had somewhat entered into their lives, while they used to use social media for connecting with friends, chatting with friends, searching for something online, and that’s it. Now talking about Gen Z, this very modern, dynamic, youthful, technologically advanced, smart, bashful generation lives on their daily dosage of social media. Technology is everything as this generation is ever running for this generation and needs everything to be quick and on their quick fingertips.

This generation has the power to rule the world with just a screen, data recharge, and power that’s it. Hold on, Hold on for those people out there who are not able to understand and are getting too confused as to what this X, Y, Z is; what are we talking about social media or alphabets, so don’t, let’s discuss what this all is in brief.

It is very evident that there is a lot of confusion among the gender cohorts. These generational cohorts are defined by birth year and not current age; this is quite logical as the generation grows older in groups. Regardless of your age, you will always belong to the era you were born into.

Having discussed the generation cohorts, let’s discuss Gen Z and its relation with social media. As everyone knows, this generation has been raised on the Internet and social media, with the eldest finishing College in 2020 and entering the mainstreams.

An article by the World Economic forum’s citing a report by Global Web Index on Social Media Use by generation confirmed that Gen Z is a digital native who spends 2 hours 55 minutes per day on social media. The Internet is an integral aspect of their lives.

The study also discovered that Gen Z, with the increasing virtual ruling that is gradually replacing physical society and the rising trend of faking things, virtual friends, and showing off. The study also shows that Gen Z prefers visual media platforms more than chatting platforms such as YouTube, Snapchat, and Instagram (virtual media platforms). Facebook and telegram (chatting platforms). For Gen Z, visual media outlets are ways for a larger audience to express themselves visually.

Instagram tops the list if we look at the numbers, followed by Twitter and YouTube. As the facts prove, Gen Z is the most prominent promoters, buyers, or rather users of the e-commerce markets. The youth nowadays uses social media to promote and spread things rather than just using them for instant interactions. Social Media aids the platforms and puts them to use for product research, brand engagement, and online purchases.

With 72 percent of top brands acknowledging that much of their stock is sold online, the e-commerce industry has seen an increase in its control power. They have provided a large portion of their marketing capital to online influencers. Gen Z believes in authenticity and that it is necessary and wishes to have real people rather than celebrities as digital influencers. Followers see these influencers who are like them as adolescents and experience a sense of closeness, giving them a boost as a marketing power; Gen Z was found to be 1.3 times more likely to buy a product endorsed by their favorite influencers.

For that matter, for this generation, YouTube has become a forum for learning rather than just pleasure. They use it as a source for developing awareness and are actively looking for videos of new products and skills. However, Gen Z does not spend more than 8 seconds on a single video; this generation has persuaded the marketing industry to come up with 6-second advertising as the marketing industry as the new standard.

This category has a clear sense of intent and feels related to significant causes. Statistics have shown that nearly 2/3 of millennials and Gen Z prefer brands that have something to trust and endorse or stand for. This generation is aware of global problems and uses social media as a tool to reach all the information out there, connecting them with the businesses who want to make this world change.

Gen Z is also concerned about nature; the recently organized Global Climate Strike is a huge example of their dilemma, responsibility for this transition, and knowing what they want to do. This age opposes gender inequality across social media, combating gender discrimination and toxic masculinity that imposes a stereotype on men that stresses power and emotional restraint. This generation strongly supports social encouragement of expression and affection, and emotions.

Gen Z’s open-mindedness of self-love and self-expression molds society’s mentality against the traditional norms and breaks the cliché rule of showing off by wearing what they are actually comfortable wearing and being what makes them feel good.

With an unexpected increase in mail beauty influencers leading to a wave of interest in men’s makeup of Gen Z., Gen Z is opting for and heading towards an open and gender-fluid world. Many products are in vogue and impact bringing a shift in culture and society, such as genderless mascara, foundation, and other beauty products.

This is the ever-developing relation between Gen Z and Social Media. So to sum all up, whether it’s commerce, marketing, or social justice. Gen Z is proving to be the agent of change, and Social Media is becoming a very Powerful Tool for Change.