How is “Influencing” A Real Career? 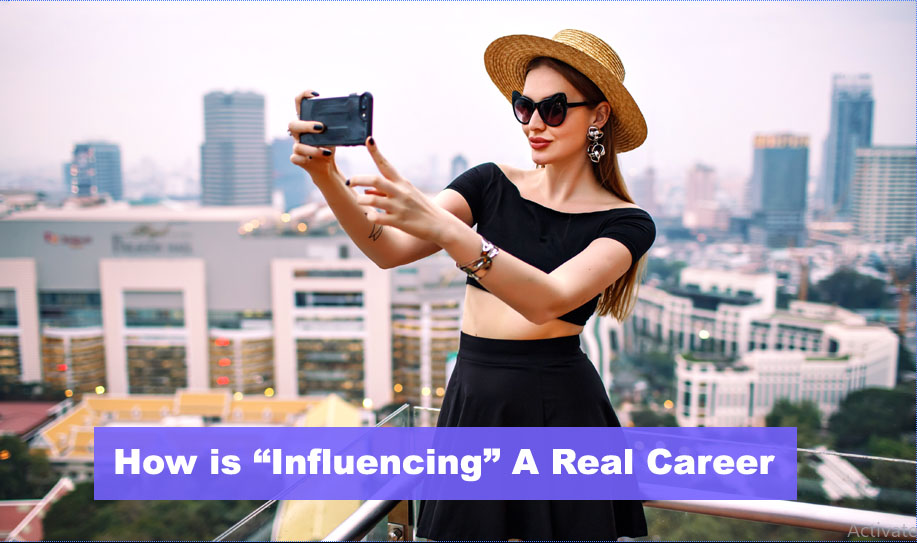 Nowadays, we see more and more people become vocal about how they don’t like their 9 to 5 jobs and that their passion lies in something else. We live in a sad reality where following our passion is not considered nice or proper. We are expected to give up our passions, which do not look like something more than just a hobby.

We are expected to find so-called “careers” and slave away doing something that we hate. Call it what you may, but social media is not always a bane. People are reuniting with their passions and showcasing their talents on their social media accounts to show them to the world.

It’s all fun and games when a person maintains their 9 to 5 job and only showcasing their talents as a “hobby” on social media. Yet, we all have heard the phrase- “When you are good at something, never do it for free.” The moment a person quits their “real job” and decides to earn by following their passion, society starts hounding them.

Either they will start calling him useless or a madman or pass on not-so-subtle snide comments about them quitting their job. “Influencing” may be an unconventional job. Still, it fetches more money than what people earn, slaving away in the It sector or private firms. This article will explore the various prospects of influencing and gauge how it can be a good career choice.

Who is an influencer?

Rahul Singh, the co-founder of Winkl, an influencer marketing

firm, says that an influencer could earn around Rs 1000 to 1 lakh on every sponsored post they do. Some influencers work full-time, and there are ones who still have other jobs. According to Rahul Singh, those working full-time as an influencer do well because they are – a) more invested in this career, b) they engage with the audience.

Rahul Singh also said that customary comments like emojis don’t do a lot for the engagement. The comments that matter is those that strike up a conversation regarding the niche you have created and whether the brands you endorse are a part of your niche.

What is influencer marketing?

The discussion about influencers and sponsored posts brings us to the topic of influencer marketing. In the earlier days, when content creators and influencers were not so common among the masses, it was only limited to a few famous bloggers and most celebrities. But as we have seen, with the advent of social media as a place to earn money, influencers have become more common. They have even saturated the market at present. There are a few horror stories, though, where some 9influencers have been caught up in fraud cases.

Suppose you have looked up influencer marketing before on the Internet. In that case, you must have found quite a few pieces of contradictory information.

Social media has been a massive boon for brands and businesses. It opened them up to a vast audience and brought in influencers who could endorse the brands. If we put it very simply, influencer marketing is a marketing strategy on social media by brands that use product mentions and endorsements from “influencers.” These influencers, thus, must have a good amount of following on their social media accounts for brands to single them out to endorse their products.

Influencer marketing is a working strategy because of the dedicated following that influencers build up over months and years and their audience’s trust. Thus, brands use influencers as a part of marketing strategy in the form of “social proof” to the audience over the Internet.

There was not even a term called “influencing” related to social media just a decade back. But now, we see brands spend approximately 1.3 billion USD on marketing on Instagram. It is pretty easy to see how influencers have affected the world economy so greatly. That brings us to the careers of influencers. We are now going to explore a 2019 interview of Audie Cornish from NPR with Cosette Rinab. She is an aspiring social media influencer. We will also explore the interview with Cornish and Sara Li, who was a former influencer.

In the first interview with Rinab, Cornish first introduces Rinab as a 19-year-old influencer who has a massive following on Tiktok and Instagram. Cornish also mentions that Rinab is not very pressing about the term “influencer.” Rinab says that when people hear about the word “Influencer,” they think of fashion or lifestyle influencers on Instagram who generally promote skinny tea. She feels that when people start gaining followers, they generally prefer to use the word “creator.”

Cornish also says that Rinab began with a fashion blog when she was in high school. From then onwards, she started reaching out to brands asking them if they would like to collaborate.

Rinab said that she would go on Etsy and reach out to small boutique shops. She would drop in a message stating her name and saying that she models and acts. She then asked the boutiques if they would like to send them some of their products to write a detailed post of the shop. She also mentioned that one of the first companies she worked with was a shoe company, and she did a great job with them. It was then that she realized that she could be earning from this job.

Cornish said that Rinab was now at the University of South California as a rising junior. Cornish mentions that she ran a club for influencers or content creators where masses of students apply every semester, but only 10% of the students can get in. She then questions Rinab if college was even necessary when one decided to pursue such unconventional jobs as influencing.

Rinab answered by saying that she gave a presentation every year in college based on collaborating with brands as many people are scared about doing that. She also emphasized taking the initiative and reaching out to companies. Whether college was necessary to do these influencing jobs, she said that it was subjective. She said that if a person feels that they are in a good position and has created a niche for themselves, they could drop out of school. She felt that when a person has achieved their maximum earning potential in this industry, a school could feel like a “hold-back.”

Lastly, Cornish asked Rinab about what she thought about the older generations not understanding her career choice. She also asked if she saw herself being an “influencer” or “creator” for the long run.

Rinab said that it was difficult for older people to understand that people could be earning more money on the Internet than in their workplace. She said that people just needed a little more time to adapt to the idea. Lastly, she finished by saying that though she was not earning enough to support herself with doing the “influencing” job, she would do this in the long run.

How is “influencing” a lucrative career?

It is a well-known fact that posting their talents on social media began as a hobby for people. But now, more and more people realize that they could be earning by following their passions. They could either reach out to companies and seek out paid work or have a brand approach them if they have a good following. It is no wonder that influencers are very much in demand. We are seeing that content created by influencers is performing better than branded assets. No job is easy, let alone “influencing.”

Influencers and content creators need to fight for their worth every day, considering the number of people who are doing such jobs is on the rise. It is not easy for someone to quit their job and turn their hobby or passion into a real job. Influencing needs to start being recognized as an actual career rather than just a hobby for content creators and influencers to get the respect they deserve.

According to reports, 59% of marketers worldwide have planned to increase their influencer marketing budget for the coming years. Thus, we can quickly see that the demand for content creators and influencers will not die down soon. With the world becoming more digital with each passing day, businesses can’t afford to lose customers and shrink their market share. Thus, influencing is a real career and will continue to be so.