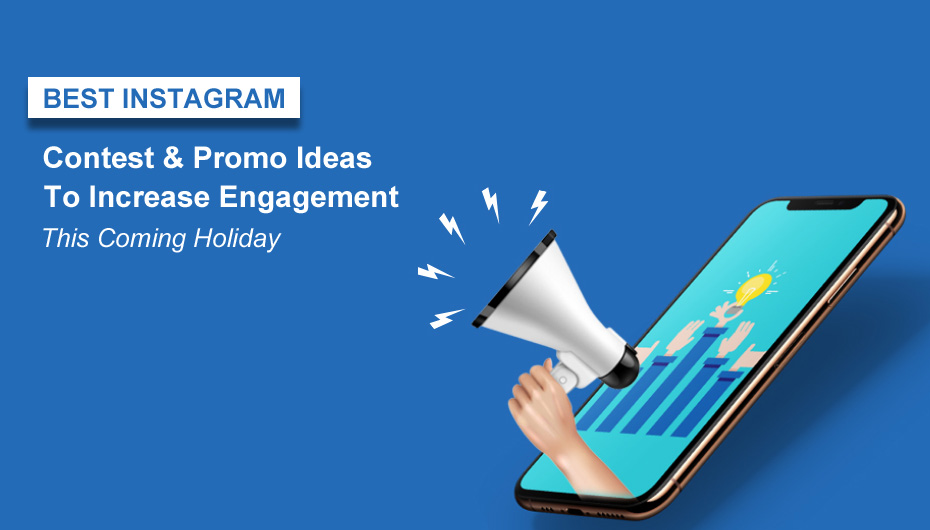 Instagram is a vast platform, a measure of which is the billion-plus active users it boasts. Still, apart from suggesting seamless opportunities, such great numbers also present a person with equally tough competition in the race to the top. Which is to say, the need to implement strategies and strengthen one’s online presence through engaging and innovative content only grows intense with time.

This need gives rise to a myriad of ways to increase engagement on Instagram, such as Instagram stories, posting longer and story-like captions on the posts, posting regularly, experimenting with content, using the right hashtags, and many others. And, while most of these methods consistently can be seen being used around the platform, some ways are yet to be explored and made use of to their full potential.

That’s right, Instagram contest and promotion, something not many people make proper use of. The following article will discuss some of the top contest and promo ideas for the coming season for that instant boost in the audience engagement and its importance–

The benefits of using Contests and Promos

Giving out rewards, prizes, or discounts is a great way to encourage people to interact with your account, and studies suggest the same, with an Instagram contest post more likely to bag 64 times more comments and 3.5 times more likes than other content.

Brands and businesses have an imperative need to find a loyal audience for their account, not to mention those who actually would be interested in their products and services, as the prime focus of any brand is not to boost online following but to boost sales, i.e., turn the prospects into customers.

Contests are a great way to market oneself to an extensive network of individuals and create brand awareness, as it does not just let one express gratitude to their followers but also boosts the chances of being known in the niche-specific community through a series of likes, shares, and comments.

As a major requirement, many contests ask a person to follow the account on which the contest is being held, apart from certain other accounts as per the terms and conditions, therefore giving a major boost to the follower count.
A study suggests that accounts that regularly hold contests have an account growth rate 70% faster than those that do not.

Though one may have thousands of followers, the number of likes, comments, or shares are always on the contrary front, and that is because a lot of people, even though they come across a certain post, do not always prefer to interact.

Contests give them a solid reason to do so. Hence, apart from the fresh account engagement one witnesses, many pre-following accounts also take action such as liking the post, commenting, or sharing, increasing the overall insight performance of the post.

What’s a better occasion to implement a contest than in the holiday season? And, this is not just because people are usually free and enjoying themselves at the time, but because of the highly competitive spirit that comes along, boosting the chances of the contests being successful.

But, a lot of success also depends on the type of contest or promo you plan for the audience. Let us go through some of the top contest ideas you must consider implementing –

There is nothing better than a selfie contest to start the holiday season for brands and businesses, as it not just brings in user engagement but gives the person a chance to create a lot of user-generated content.

The contest includes asking people to post a selfie where they could be seen using a certain product, or the product is readily visible somewhere in the background. You can further use this as an opportunity to create a brand hashtag by asking people to tag your account and use a certain hashtag when posting an entry for the contest.
Ensure that you mention in the contest description that you might use the content posted at a later date so that you have access to the user-generated content for future use.

The contest is bound to benefit in more than one way, including the exposure to the followers of all those who choose to participate in the contest.

Feel free to add a rule or alter the existing as per the brand you are promoting and the targeted audience.

If you do not have a significant number of followers or are yet not in a space to run a full-fledged contest where the audience is required to do a lot, administering a simple challenge is the way to go.

The challenge may be as simple as thinking of a number from 1-500 and asking people to guess the number and put it in the comment section. The winner will be the one who is closest to the number you guessed and will be rewarded with a certain item or coupon, etc.

The contest is not just an effective way to engage with the audience and build authenticity and trust, but given the simple nature of the event will appeal to a larger audience. Such challenges are also more interesting for the audience and easier to execute.

Well, keeping apart the fact that giveaways are one of the most successful strategies on Instagram, did you also know they are equally easy to implement and can be administered regardless of the number of followers?

A giveaway is giving out a reward for free or, better said, in exchange for likes, shares, comments, or tags on a particular post.

A giveaway is as simple as setting goals, drafting a detailed description of the same for the audience, selecting a pleasing reward, promoting the post at initial levels, and done. Now, one just has to watch as those likes and shares roll in.

Some giveaway ideas include –

The winner could be fairly picked for a giveaway by either manual selection of the best results or using software or running a random pick.

Think of a caption contest

Simply posting an image or a video on the platform and asking your followers to type out the best caption they could come up with for the post in the comment box makes for a great contest idea, not to mention letting people know that there is a reward or a surprise for the person who comes up with the best caption.

The contest will be like a simple, fun activity for all your followers with a hint of competitiveness, letting you know how they perceive a certain thing. What’s more, it will give a grand boost to the time people spend interacting with your post as they read through other comments and brainstorm.

One could pick a winner personally or put in the set of rules for the contest that any comment that will get the maximum number of likes will be the winner to make the judgment seem fair to the audience.

This one is quite similar to the selfie contest mentioned above; just that in a voting contest, people are free to post a picture of their liking surrounding a theme that you gave them.

Furthermore, one needs to curate a special hashtag that all those who enter the contest have to use. The rest of the audience will use this hashtag to access the entries and like the post they think must be the winner.

Though effective, considering how the audience will have to self-promote a post to win, the method requires one to have a substantial following for the contest to succeed.

The voting contest gives people a chance to showcase their talent to a vast audience, promoting participation while building authenticity towards your account, boosting both engagement and the chance to increase followers.

While the above mentioned are just five trending contest and promo ideas, it is needless to mention several other ways one could use a powerful tool like Instagram, with one’s creativity being the only restraint.

Contests and giveaways make for an imperative Instagram marketing strategy both for brands and influencers, though it is crucial to implement it precisely for the best results.

Instagram is no less on accounts that run hoax contests, therefore making it a key point for all the authentic users to maintain transparency during the entire event, including choosing the right winner and letting people know who it was through another post. Happy Scrolling!