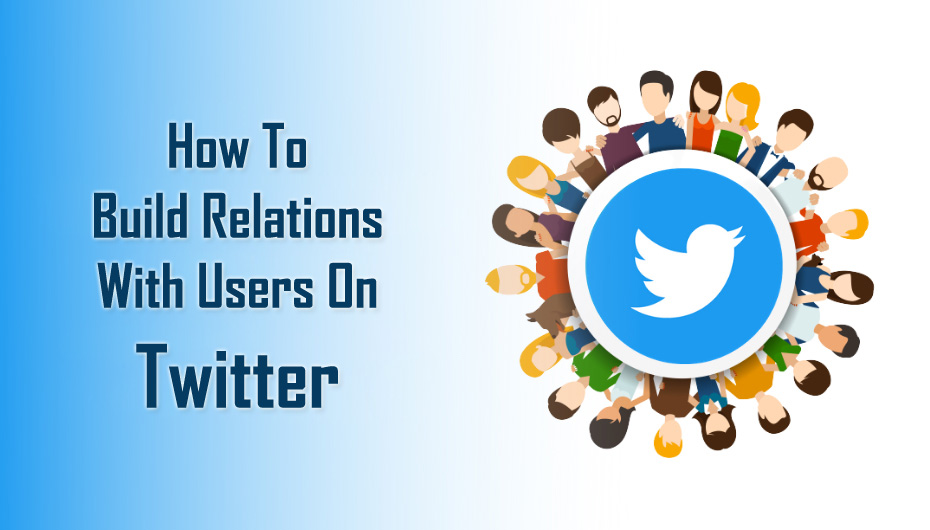 Twitter is not an easy land to tread! When you have just 280 characters to show your expertise, you know there is a need to expand your horizons and work harder to reach the same success you must have amassed on other popular networking sites. Creating content to keep the followers on the hook and make them look forward to your future posts is one thing that we all wish for. But, maintaining a relationship that lies on a two-way interaction between the brand and the followers is always better.

But to reach there, is it easy? Fret not, for you are not alone in the race. Here are a few pointers that are vouched by the successful and are left behind to be used by anyone who wants to gain the same.

Target the audience you want to build rapport with

Sure, not as popular as the stalwarts, but Twitter also boasts of a humble number – over three hundred million monthly active users. These large numbers mean you need to carve out a target audience with whom you want to build relationships with on the platform. Not all are interested in your banters, nor are you capable enough to entertain them all.

Hence, make sure you know the users you want to approach first. This way, you know what content you need to put out, rather than generalizing it and diminishing its quality along the way.

And as they say, like attracts like, as you slowly grow in numbers, your tweets are surely bound to attract the like-minded along the way!

Twitter is one of the best platforms to socialize with big business cooperation as well as with the entrepreneurs just starting out. It is just a matter of relevance and how you go about with words. Hence, drop the inhibition on whom to approach!

Take the first step towards interaction with the users!

Tweeting and waiting for the tweet to be taken by the masses is a dream too good to be true. On the networking platform, you need to make your presence known to others, and the only way to do so is to take the first step towards socializing with the others on the platform.

The first start to get rid of the inhibition is to start socializing with your acquaintances who are present on the platform. Be it from your contacts or other media platforms. Forge the relationship with the users riding on common areas of interest or previous engagements. Use this learning experience while trying to reach out to others on the platform.

To find followers, one way is to directly tweet or retweet their contents or reply.
The other potential way is the use of hashtags. Hashtags help other users to find your content categorized under hashtags. According to statistics, it is found even one hashtag increases engagement up to 12%. Thus, only you need to do is pick out the right category for your content and according to your users.

It is often the case that people lose the vigor after the initial success. They try hard in the initial days but forget to maintain the engagements that they receive from the users.

Do not fall into oblivion and ignore the goodwill gestures of the users. Maintain positive relations with them just as you did in your initial days of struggle. Reply to the retweets and hashtags directed to you. It might be a little cumbersome when you have large numbers to deal with, but for the users, these are interactions they look out for!
Never think twice before showing your gratitude. Freely promote other’s content that you feel is worth sharing (of course, giving credits and linking them). These small measures help to grow as a brand and as a community.

Increasing your visibility on the platform requires you to tweet often. The more you tweet, the more visible you are on their home page, increasing your chances of getting more retweets or engagements.

However, if you are tired of churning out content that must speak volumes each time, then worry not, for there is a large area where you can explore. Like the work statistics, interest areas, compliment/ congratulate people. These bring in more value to your account than contents, just limiting to your brand.

One way to maintain relations with the users is to retweet your followers’ tweets or use them to give witty replies to the tweets. Who knows, they might make someone’s day!

Engage according to metrics

Metrics of twitter show that content with a visual guide engages more with the users, followed by the hashtags. Hence content planning with these two in mind will give back to you greater returns than the others. Since creating content liked by the users is the best way to maintain the relationship with them, it is worth making a note that content that receives greater engagement may also be due to the topic at hand.

A look at @BTS-twt Twitter handle shows the tweets accompanied by visuals (pictures or video clips) garners almost a million times more than what just the tweets acquire.

@tinybuddha, which tweets quotes and stories, makes sure they post a visual version of the same together with the post, which piques the users’ interest and helps them understand the concept at a greater level.

Believe it or not, there is a right time for everything!

Based on the statistics, you can deduce a time that overlaps with most of your users and schedule post. Being on the same grounds with the users, you can have real-time exchanges with them, leading to exchanging ideas and plans.

Users bind a great expectation from you and constantly look out for content. Statistics have noted that almost 15% of followers unfollow an account following a period of dormancy exceeding two weeks.

Hence, if you want to maintain healthy relations with your followers, the best way is to create contents that cater to them and to time the frequency accordingly. Contents with links that direct them to full coverage of the story help users be updated about the same. Or the links can also direct them to the new promotions or giveaways that your brand plans to roll out in the coming season.

Also, limit the contents that are strictly official as it seems to engage the audience less. Look at the @McDonalds’ creative way to promote their new launches without breathing into the back of the users. Witty one-liners and interactive questions set the things rolling for them. So, they would surely work for you too!

Building a great relationship with the users is closely related to your growth on the platform. Maintaining a positive interaction with the followers helps you build a greater community for your brand. Since they are the ones that further increase your visibility on the platform, a healthy follower will bring you many more like-minded users to your account.

Hence, making the long words short, the crux of the matter is to know your users and engage with them to maintain a healthy relation with them.